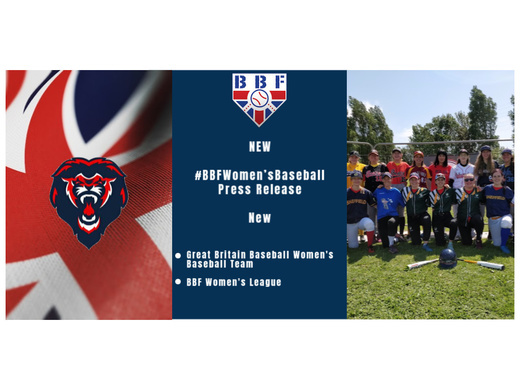 The promotion of Women's baseball becomes a dynamic element of the British Baseball Federation (BBF) the National Governing Body (NGB) of Baseball roadmap to enhance the sport of baseball.

b) The formation of a Great Britain Baseball National Women's Team, which will go with our U12, U15, U18, U23 and Seniors' team.

A spokesperson for the board of the British Baseball Federation, said, "To succeed in promoting the sport of baseball, we need a strategic professional approach to develop critical elements of our sport. Promoting women's baseball is a crucial element for the success of our sport evolution at the local and international level. In association with WB-UK Women's Baseball UK, we will extend an equitable framework to women, e.g., playing opportunities, knowledge, and support. With WB-UK Women's Baseball UK being a part of the BBF, it sends a strong message that it adheres to highest and national standards as prescribed by the NGB of our sport. The BBF plans to source private donations and public funding to finance women's baseball opportunities. We are proud to announce we have already secured an individual donation to promote women's baseball.

Amanda Hocking said, "I am delighted and honoured to have been appointed as the Women's Baseball representative for the British Baseball Federation (BBF), and I am looking forward to the challenge in moving women's baseball further ahead in the UK. By incorporating Women's Baseball UK (WB-UK) under the BBF umbrella as the UK's official representative for women's baseball, we can work closely together and provide greater opportunities for the players which have always been my number one priority since forming WB-UK in 2017.

Amanda further went on to say, "For any baseball player, the ultimate achievement is to represent their country, and I welcome the announcement of a Women's National Team. I see the role of the GB National Board as one which ensures that our players are provided with the level of support they need so that both the men's and the women's teams can be equally successful. With the upcoming developments in Women's baseball across Europe in the past 18 months, Great Britain must be featured alongside other countries who are also proudly setting a great example in baseball by investing in Women's National Teams."

ABOUT THE BRITISH BASEBALL FEDERATION (BBF)

The British Baseball Federation (BBF) is the National Governing Body (NGB) of the sport of baseball. The BBF is the sole administrator and custodian of our Great Britain Baseball National Team Programme (GB Baseball). The BBF is a 100% self-funded NGB. The British Baseball Federation (BBF) is committed to providing equality, fairness and respect for all. Being a part of the BBF is available to all, regardless of age, disability, gender reassignment, marriage and civil partnership, race (nationality, and ethnic or national origin), religion or belief, sex (gender) or sexual orientation. For more information, refer  e-mail info@britishbaseball.org

As a result of government guidelines and COVID-19, the BBF face to face activities are suspended until the 1st July 2020. Subject to change.