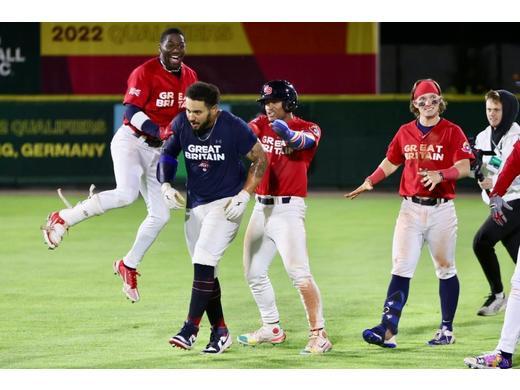 The Great Britain Baseball Men’s national team made history Tuesday night, qualifying for the World Baseball Classic for the first time with a walk-off, come-from-behind victory over Spain, 10-9.

The Great Britain Baseball Men’s national team made history Tuesday night, qualifying for the World Baseball Classic for the first time with a walk-off, come-from-behind victory over Spain, 10-9.

With the victory, Great Britain advances to the 2023 World Baseball Classic, to be played next 8-21 March in Taipei, Tokyo, Phoenix and Miami. Further details will be announced in due course.

MLB veteran Vance Worley made the start for Great Britain, who played as the home team for the first time in the tournament. The Lions trailed early, as Spain put a four spot on the board in the first inning, but Harry Ford continued his torrid hitting to get GB on the board, crushing his third home run of the qualifiers to lead off the GB first.

Spain added to their lead in the third, but GB clawed back, with Anfernee Seymour the catalyst. Seymour reached base to lead off the inning, scoring on a Nick Ward double, with Ward adding a run-on Justin Wylie’s tripe. After three, the Lions trailed 5-3.

Michael Roth replaced Worley and surrendered a 3-run home run to top prospect Noelvi Marte of Spain, but Great Britain struck back in the bottom of the inning. D'Shawn Knowles and Seymour reach on singles, and Ford again delivered, delivering an RBI single on a full count pitch with two outs to bring the score to 8-5.

Great Britain would narrow the gap in the fifth, with Ward scoring on an RBI single for Knowles. After neither team scored in the sixth, Spain would get some breathing room with an Edison Valerio RBI double to score Ustaritz, making the score 9-6.

Then came the comeback.

In the bottom of the 7th, Wylie singled, and after he was replaced on the basepath by Alex Crosby with a fielder’s choice, Knowles slammed a home run to right field, bringing GB within a run, 9-8.

Donovan Benoit entered the game in the eight, pitching a pair of scoreless innings, while GB was unable to score in the eight. With two outs in the ninth, and GB down by one, Jaden Rudd stepped into the box, and launched a home run to deep right field to tie the game and send the qualifier to extra innings.

After Tanaj Thomas held Spain off the board in the top of the 10th, Matt Koperniak took his place at second base under the extra inning rule, advancing to third on a close play at third – while originally ruled out, the call on the field was overturned after a challenge by GB manager Drew Spencer. With the winning run at third, GB veteran Alex Crosby lofted a ball to left field, deep enough to score Koperniak, and send Great Britain to their first ever World Baseball Classic.

Stay up to date with the team on their World Baseball Classic journey by following Great Britain Baseball on Facebook, and gb_baseball on Twitter and Instagram.