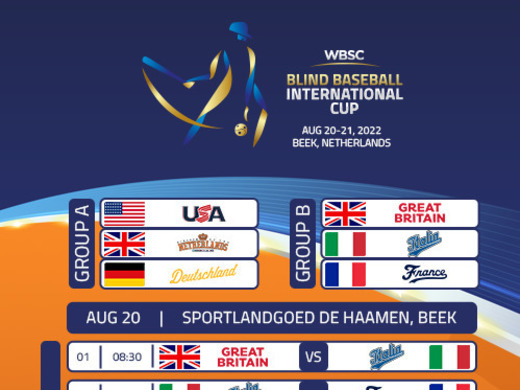 The first ever WBSC Blind Baseball International Cup is set to open in Beek, Netherlands on August 20th.

The Great Britain Baseball Team is set to compete in the first-ever WBSC Blind Baseball International Cup in Beek, Netherlands.

Six National Teams will participate in the first-ever blind baseball event sanctioned by the baseball/softball world governing body (WBSC).
The WBSC Blind Baseball International Cup is set to open on the fields of HSV Cheetahs in Beek, Netherlands, on Saturday, 20 August.

Six National Teams will participate in the first Blind Baseball event sanctioned by the WBSC:

Great Britain will be playing Italy and France on day 1 of the International Cup.

This version of Blind Baseball, based on sound coming from the ball, derives from an idea by the late Alfredo Meli, a former Italian Baseball League player and manager. Meli was one of the founders of the Italian Association Baseball for the Blind (AIBxC, a WBSC Associate Member) in the early 1990s.

The Great Britain Team that is traveling out to the Netherlands is run by UK Blind Baseball, the recognised body for the sport by British Blind Sport. UK Blind Baseball is now a cic and has been an entity since 2019, originally put together to introduce a new sport for the visually impaired. The organisation was formed by a partnership between Lancashire Lions and Manchester baseball Club’s head Coach John Eaton.

We would like to express our best wishes to the team competing over the weekend in the Netherlands!