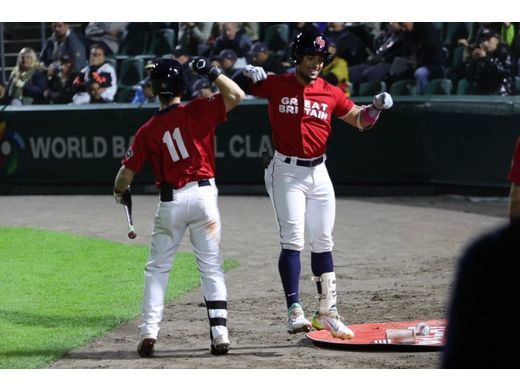 The Great Britain Men’s Baseball Team got off to a winning start at the World Baseball Classic Qualifier on Friday night with a 14-4, 8-inning victory over cross-channel rival France.

REGENSBURG, GERMANY – The Great Britain Men’s Baseball Team got off to a winning start at the World Baseball Classic Qualifier on Friday night with a 14-4, 8-inning victory over cross-channel rival France.

Playing in their first WBCQ game since 25 September 2016 - 1,182 days ago - the game began with a moment of silence in honour of Her Majesty Queen Elizabeth II, and the first-ever singing of God Save the Queen by a GB Baseball team.

McKenzie Mills got the start for Great Britain and needed just 6 pitches to retire the side in the bottom of the first. In the second, a leadoff home run for Ivan Acuna put GB at a deficit, but catcher Harry Ford was able to able to end the inning with a screaming throw to third on a pitch in the dirt - after a successful challenge from Manager Drew Spencer - to retire France’s Bastien Dagneau.

GB’s bats fired up in the third, and again Ford was the catalyst. After Anfernee Seymour lead off with a single, he was able to advance to third before Ford crushed his first international home run to straightaway centre field and gave the Lions a 2-1 lead.

Mills was able to escape a bases-loaded jam in the bottom of the third, and then GB extended their lead. Alex Crosby and D’Shawn Knowles both reached base on free passes, and, after a pitching change, Rudd joined them on-base with another. Kent Blackstone then grounded into a double play, with Crosby scoring, and Seymour added an RBI single to bring in Knowles and extend the lead.

Vance Worley made his GB debut with a 1-2-3 inning on 12 pitches in the fourth and was rewarded with run support when Nick Ward scored on a Knowles double in the fifth, extending the lead to 5-1.

Gunnar Groen relieved Worley in 5th, and got into trouble, with a pair of runs scoring, before Camrin Opp came in to retire the side. GB added another run in the sixth on a Matt Koperniak RBI single, scoring Ford.

Great Britain’s offense exploded in the seventh and eight innings, scoring four runs in each frame. In the seventh, a two-run single by Jaden Rudd, and a pair of run scoring hits for Blackstone and Seymour did the damage; In the eighth, Blackstone again singled and both Justin Wylie and Rudd scored on an error by French right fielder Mael Zan and came around to score on a Seymour single. Ward then was hit by a pitch with the bases loaded, scoring Seymour. France scraped a run back in the seventh on a sacrifice fly, but with a 10-run deficit after eight innings, the World Baseball Classic run rule came into effect, giving the Lions their first victory of the tournament.

Mills (1-0) earned the victory in the start, while French starter Kevin Canelon (0-1) shouldered the loss.

Great Britain will play host nation Germany on Saturday at 6 PM BST at a sold-out Armin-Wolf-Arena.