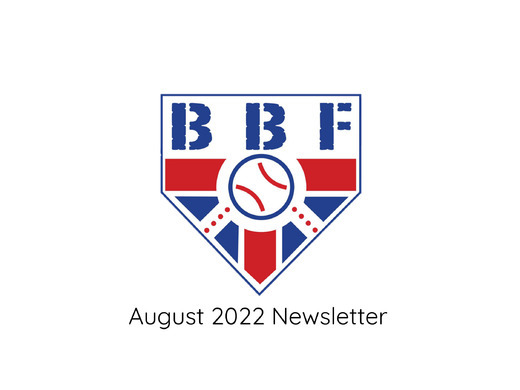 Please read our August edition of the BBF Newsletter. Inside you will find information on the activities of our Federation over the last two month.

Welcome to the August Newsletter!

GB Women Make History
Congratulations to the Great Britain Women’s Senior National Team on making history in Montpellier, France this month at the WBSC European Women’s Championships. The GB Women’s side was the first British Baseball team to ever go to a Women’s European Championships. The team played against the Czech Republic, Netherlands and French across the three games. You can find all the results and the streams of the women’s games on the WBSC YouTube Channel: https://www.youtube.com/c/WBSCEurope. Congratulations to John Baxendale who was also in France umpiring the Championships. John is a graduate of Wendelstedt Umpire School and regularly suits up for many of the BBF’s National Baseball League Games.

Great Britain’s Successful Summer!
The Youth National GB Program has had one of its greatest summers in the history of the program. All three squads reached the finals of their respective European qualifying tournaments.

GB U18s U18 European Qualifier Winners!: Like the U12s, The Great Britain U18s have won the U18 European Baseball Championship Qualifier, which was held this week in Sundbyberg, Sweden. As a result, the team qualifies for the European Championships which are due to take place in mid-August of this year in the Czech Republic. Congratulations to coach Jonathan Rodriguez!

Upcoming World Baseball Classic Qualifier Regensburg Germany
The Great Britain Men’s Senior National Team is due to compete in the upcoming World Baseball Classic Qualifier in Regensburg, Germany. The German city will be in the spotlight from September 16th to the 21st, as hosts Germany, Czech Republic, Spain, France and Great Britain will compete together with South Africa for two spots in the main tournament of the World Baseball Classic to be held in March of 2023. With only two teams advancing after the double eliminated formatted tournament, at least one European team will be guaranteed to join the already qualified 16 teams in the main event, which already includes the Netherlands, Italy and Israel.

London Archers in PONY 2022 World Series
The London Archers have spent the past weekend competing in the Pony World Series in Lew Hays, Washington, Pennsylvania. After winning the PONY League Baseball U14 Championships earlier this year the London side were invited to compete in the prestigious tournament schedule for the 12th August. PONY organizes youth baseball and softball leagues and tournaments and each year televises a Pony League World Series. The competition attracts teams from around the world.

MLB Announce London Games
It’s official. The Cardinals & Cubs will face off in London for a two-game series June 24-25!

The 2023 London Series will mark a return to the baseball-configured London Stadium following the inaugural Mitel & MLB London Series that was held on June 29-30, 2019 between the Boston Red Sox and the New York Yankees. The two-games at London Stadium were the first-ever regular season games played in Europe.

Vacant Board Positions
The BBF are searching for volunteers to fill the following vacant positions on our Board:

Youth Affiliated Clubs League Commissioner - Oversees aspects of youth baseball, leagues and rules and acts as the primary point of contact for youth baseball queries. Also responsible for scheduling and format of Youth National Baseball Championships (YNBCs).
Coaches Commissioner - Oversees aspects of coaches development to enhance coaching for all levels. Should provide feedback on performance, skill and improvement techniques to improve the skills of our member coaches
Treasurer - Oversees all aspects of the financial management of the Federation. The Treasurer is the Chair of the Finance Committee and controls the bank accounts for the Federation. Should be a qualified accountant.

If you are interested in performing any of the roles listed above, please email info@britishbaseball.org.uk