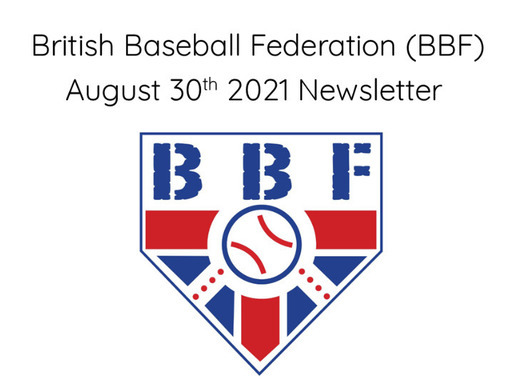 Welcome to the first monthly BBF Newsletter of 2021, bringing you up to date with recent events, important announcements, dates for your diaries and plans for the future development of our sport.

Welcome to the first monthly British Baseball Federation (BBF) Newsletter of 2021. Each month the newsletter will bring you up to date with recent events, important announcements, dates for your diaries and plans for the future development of our sport. Clearly there have been many challenges to our sport in the last 18 months resulting in different changes that have ranged from league operations to governance. You will have already been aware of many of these changes through various communication channels, and they are included in this newsletter.

The current composition of the Board is as follows:

With a view to improve communication within the membership and ultimately the wider baseball community, a communications committee has been created with a brief to come up with a longer-term communication strategy for the BBF. The committee is comprised of Earl Dix, Chris Carter, Richard Evans (Bristol Baseball Club), Anna Williams (mother of two long-time youth players here) and Tom Thornhill (Norwich Iceni). The Committee has produced its initial report for the Board’s review.

The handover as announced following the resignation of the BBF President in May has yet to be completed. The remaining issues include but are not limited to the control of the BBF Internet domains, a bank account, previous data collected in respect of Safeguarding, and some other online resources. We are hopeful that the full handover will be achieved within the coming weeks.

The Federation’s AGM will be held in Q4 this year in line with what took place previously in certain years. The date will be confirmed next month, and we look forward to possibly being able to hold the AGM in person again, if appropriate.

Following on from the above point about the date of the AGM, a governance review is due to be conducted soon, which will include the Constitution and other aspects of how our sport is governed.

There have been various relaxations of Covid-19 protocols since the start of the season, each one incrementally reducing the requirements on clubs and individual participants alike. We continue to urge vigilance in order to ensure we continue to play baseball safely. It remains vital that all safety measures in place are followed. Government roadmaps and policies remain subject to change at short notice. Therefore, please keep yourselves updated through regular trusted channels and remember that local and national Government guidance supersedes advice provided by BSUK, the BSF and the BBF, the latest version of which was issued on a tripartite basis in July. For the latest information and resources, please visit https://www.baseballsoftballuk...

Over the last three months, the BBF Board as a whole has been reviewing its sweep of responsibilities, particularly the functions previously covered by BSUK before the termination of the Members Agreement. The BSUK charter covers a significant number of these functions and more that are currently the responsibility of the BBF Board. As announced earlier this month, the Board took the decision to charter with BSUK.

The charter offers the BBF resources and expertise to enable an organisation such as ours to operate more efficiently by not duplicating efforts. This will enable the BBF to maximise the use of volunteer time and critically, to work with and direct BSUK’s development initiatives to grow baseball.

As a result, all BBF clubs are now automatically chartered with BSUK (whether previously chartered individually or not) and your club can take advantage of the services they offer, which includes Fundraising & Grants, Coach Education, Youth Development and Facilities Resources. Please see https://www.baseballsoftballuk...

One important function that BSUK provides is Safeguarding. With immediate effect (and as previously communicated), BSUK will also be the lead contact for any Safeguarding issues, including DBS checks, training and support for the BBF and all other chartered clubs. If you have any Safeguarding support concerns or questions, please contact BSUK at welfare@bsuk.com or visit www.baseballsoftballuk.com/saf...

Given the administrative complexity that was introduced for the payment of insurance premiums by the members at the beginning of the season, we are looking for an interested volunteer. We need help in reviewing the £1 payments made to our bank account and matching these payments to
member rosters. We also would like to make sure that all members of all our clubs are covered for any personal accidents that might have occurred or may occur up until the end of the 2021 baseball season. Please send an email to info@britishbaseball.org if you are interested to help us.

Many youth programmes have completed their regular seasons achieving what they could due to the delayed start and unfortunately without the cancellation of the Little League Europe/Africa regional qualifier. However, with changes to Covid restrictions, the BBF will be holding its Youth National Baseball Championships (YNBCs) as usual in early autumn. Kent Boswell has sent out notifications for these Championships. If you have not already, I would encourage your club to register your youth programme for the YNBCs. If you have any queries, please get in touch with Kent on kent.boswell@britishbaseball.org

We continue to celebrate the success of the inaugural season of Women’s Baseball – UK (WB-UK). Judging by the excitement and interest generated at each of the tournament days in Cambridge, Sheffield, Bristol, Farnham Park and Finsbury Park they have clearly been hugely enjoyed by all who took part and spectated. There are currently 8 teams participating and growing in the WB-UK league which is great to see. The WB-UK Women in Baseball Week Championship took place last month which was co-hosted by Bournemouth Bears. The West Ham Hammers (also known as the Purple Pirates) won the championship against the Kodak Girls. Both Teams were named after UK women's teams from 1930s.

Following the most recent appointment by GB Baseball of the GB U15 Head Coach, all the age groups from the U12s to the Seniors team now have Head Coaches. These Head Coaches are:

Sadly, none of the age groups below U23 have played in tournaments this year because of the pandemic. Some of the tournaments were cancelled and, in some cases, it was not possible for our teams to travel for the same reason. Both the Seniors and the U23s will be playing in the European Championships, and these are being hosted in Italy. The U23s have just come to an end in their tournament, and the Seniors begin their campaign against France on 12 September

The GB Women’s National Baseball Team held tryouts this month at the Herts and Hull baseball clubs. The women chosen for the extended GB roster will train over the offseason in preparation for the 2022 European competitions.

As the regular season draws to a close, the playoffs and finals are fast approaching. Hopefully, you will have seen the announcements that Chris Carter has made about these competitions. The previous Board had decided to outsource the location of the different competitions to club venues throughout the country, and we agreed that this decision should be honoured. The dates and venues were announced at the end of June, and many clubs will proudly host the various events.

The BBF is finalising the opportunity to host a Single A Champions tournament at Farnham Park. Competing there will be the East of England Baseball League, British Baseball League, Westcountry Baseball League and West Midlands Baseball League. Chris Carter and I have been working with BSUK and the Independent Leagues to arrange the logistics of this tournament. Winners from each of the independent leagues will play the finalists of the Single A BBF National Baseball Championship on the 26th of September in a one-day tournament. More details on this event will be announced soon.

Good luck to all teams who are involved in play offs and finals!

BBF Secretary on behalf of the Board