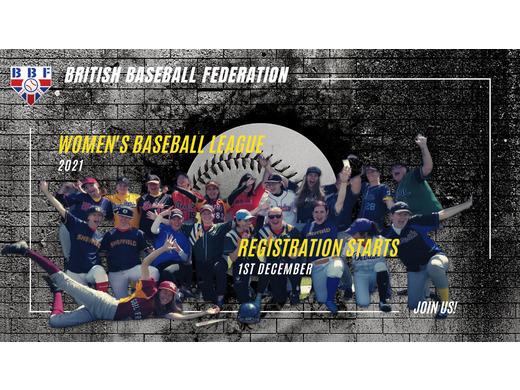 Expected to be the second in Europe (France being the first) and only the eleventh worldwide to hold a National Baseball Championship just for women teams.

"To empower and promote women so they can experience and enjoy equitable baseball opportunities to reach their potential both nationally and internationally."

In 2021, the British Baseball Federation (BBF) will launch the Federation's Women's Baseball League, followed by the Women's National Baseball Championship. Also, the Great Britain Women's National Team plans to make its inaugural depute on the international stage. The BBF Women's Baseball League, is part of the Federations strategic priorities e.g., to lead in the promotion of the sport and develop the capacity to adapt to the changing marketplace through innovation.

"The BBF aims to recruit, develop women's talent and make it a place where women feel appreciated and its an enjoyable place to participate in baseball," said Gerry Perez, president of the BBF.

He went on to say, "The British Baseball Federation (BBF) as the National Governing Body (NGB) of our sport, values the promotion of diversity, equity and inclusion (DEI). According to the latest government Census, women and girls made up 51% of the population of England and Wales, and men and boys made up 49%. Most ethnic groups had roughly the same male and female populations. We must reflect the sociocultural dynamics of those around us, in baseball, if we are to succeed.

Women offer us an assortment of skills and value in our sport. We must no longer miss the opportunity to recognise and promote women, as they have earned and deserved it. While women (diversity) play already some roles in baseball, i.e., in a mix of playing in our senior leagues or taking part in running our member clubs, the shift now is in promoting and investing in women baseball opportunities specifically. While we pride ourselves that our Federation is diversified, we must not confuse diversity and inclusion to mean the same thing. Diversity and inclusion are separate terms and have different objectives. By creating the environment, common purpose, culture and opportunities for women to be included in our sport, e.g., in their League and opportunities, we expect to motivate women to participate in our sport and know their involvement and opportunities will be equal and inclusive.In association with WB-UK Women's Baseball UK, we look forward to raising awareness, recruitment and participants in our women's League and Great Britain Women's National Team. Game on!."

To further support the BBF Women's Baseball League, the Federation has announced securing through private equity an equipment donation, e.g., ranging from elbow guards, helmets, catchers equipment and so on.

Amanda Hocking, founder of WB-UK Women's Baseball UK and now BBF Women's League representative, said, "2020 has been a challenging year for all sports, let alone baseball. However, what a year it has been for women in baseball! From the fantastic news of the recruitment of the first female coaches in MLB history to the Miami Marlins hiring Kim Ng, who has recently become the first female General Manager for any MLB organisation. The mentioned remarkable women have opened the doors for many girls and women, who can now achieve the same goals with a much easier pathway to the top. I am pleased that the British Baseball Federation has set a great example in modernising as a National Governing Body without hesitation and have committed to invest in women's baseball by providing equal opportunities such as the women's national team. By also forming a women's baseball league for 2021, this creates further opportunities for our female players."

The new Women's League Club and team registration start on the 1st of December through the BBF website. The BBF announced the League would run from April to August, with a 24 game schedule (single and double-headers) is proposed, followed by the playoffs. The culmination is the BBF National Women's Baseball Championship. Games will be played on Saturday, so all women can also play in Sunday in the Seniors Baseball League. Contingent how many teams register and form what region; the aim will be schedule games in regional areas throughout the regular season to minimise travel.

The public will be able to follow the action all year, through the British Baseball Federation website. Awards at the end of the season, e.g., League Most Valuable Player (MVP), top women's coach, and team champion. The BBF also plan to organise offseason remote training through webinars (with ex MLB players and internationally recognised coaches). Also, the BBF plan is to make use of its membership with the WBSC and tools, to supplement support for its Women's League.

Dr. Kat D. Williams - President, IWBC said," "We at the International Women's Baseball Center are so proud of the work done by the British Baseball Federation. Few organisations around the world have been as dedicated or as successful as the BBF at providing opportunities for women to play baseball.

Women deserve an equal opportunity to play, coach, umpire or be part of baseball. Some might argue it isn't that important, after all, it's only one sport. Women have access to other sports. To us, baseball is not just any sport. It is THE sport and simply put everyone should have the chance to play it. The BBF is making sure British women get that opportunity, and the IWBC could not be prouder of the example they set."

The BBF is expected to showcase a sample of its Women's Baseball League, through its YouTube Baseball Channel, which shows the best of British Baseball (subscribe now).

NOTE: The above is subject to change, considering government restrictions as a result of COVID-19.