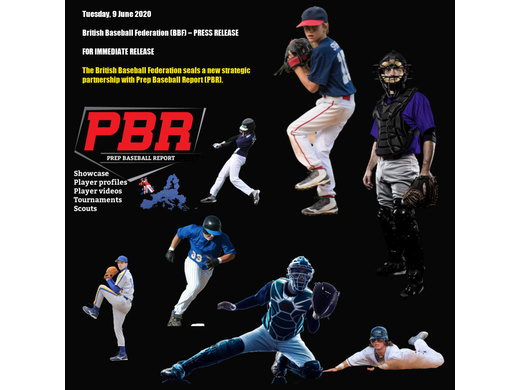 The strategic partnership between the British Baseball Federation www.britishbaseball.org and Prep Baseball Report (PBR)www.prepbaseballreport.com, is intended to offer British and European amateur baseball players the opportunity to showcase their skills from this continent, to top United States colleges and universities, with the aim to get recruited.

Since its inception in 2005, the Prep Baseball Report has evolved into one the United States most prominent and most respected independent scouting services, with a singular focus of providing comprehensive year-round coverage in every state PBR are operational. PBR aims to help athletes (between the ages of 13 to 18 years of age) to achieve their dreams of playing baseball at the next level in the US. With more than 150 scouts, PBR has the most extensive baseball scouting infrastructure across all levels of amateur baseball in the United States.The Prep Baseball Report is the No. 1 resource for amateur baseball in each US state they cover through a variety of events, scouting staff, daily coverage, and multimedia platforms. PBR's multimedia platforms and events work in tandem, ultimately creating the most powerful source of high school baseball promotion in each US state.

A spokesperson for the BBF, explained, "Our partnership with PBR aims to offer British and European teens from this side of the Atlantic a local bridge to PBR's showcase events, scouting services, access to multimedia platforms and evaluations. Also, PBR will engage with the families and players to target schools to aim for and play in the United States after graduation. PBR offers extensive services to amateur baseball athletes and showcase events in the US. However, for British and European players, the mentioned is costly and restrictive if you add up travel and lodging to the US. By offering access to PBR, from Britain and Europe, we believe we can cut the angle and reduce the costs, for players to get recruited to top US colleges. Once an athlete takes part in the PBR experience, the athlete's recruitment profile improves. While there are no guarantees, there is now a framework to make it to the next level.  In the US, there are over 2000 junior colleges and universities which offer academics and top baseball competition. There is baseball talent in Britain and Europe which deserves recognition. Considering PBR accepts athletes from 13 to 18, it's an investment from a young age to when the athlete is ready to attend university. The reward, a top education and a great baseball experience."

The spokesperson for the BBF went on to say, also, "we will be working with PBR until our first showcase in 2021, to offer interested players, and families a support network, to attend US colleges, insights to schools offering baseball across the US, which we believe will incentivise the next generation of British and European players to reach their dream."

Seperately, "Prep Baseball Report is very excited to be partnering with the British Baseball Federation," said Prep Baseball Report President Sean Duncan. He went on to say, "The British Baseball Federation is innovative and well connected on the continent. We are confident the BBF, in co-operation with other European NGB's, can shine a brighter light on all the talented players in Britain and Europe who are willing to take part and offer their players the ability to aspire to play baseball at the next level." said Sean Duncan, President of PBR.

The BBF will be providing more details about what is to come, so tune it to www.britishbaseball.org

The British Baseball Federation (BBF) is the National Governing Body (NGB) of the sport of baseball. The BBF is the sole administrator and custodian of our Great Britain Baseball National Team Programme (GB Baseball). Further, the BBF oversees the nationally recognised baseball rules, BBF YouTube Channel, officials, promote 0UK AD (Anti-Doping) compliance and offers the highest concentration of organised baseball leagues and playing opportunities for adults and youths in the country under one Federation. The BBF is a 100% self-funded NGB.
The British Baseball Federation (BBF) is committed to providing equality, fairness and respect for all. Being a part of the BBF is available to all, regardless of age, disability, gender reassignment, marriage and civil partnership, race (nationality, and ethnic or national origin), religion or belief, sex (gender) or sexual orientation.
The BBF Mission

To advance and promote opportunities in baseball, so that participants in our sport can enjoy and expand their reach through our Federation.