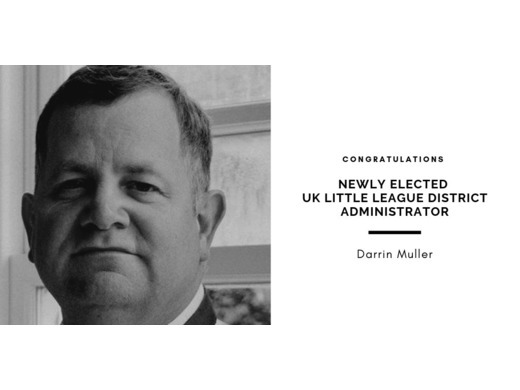 Mr. Muller, a retired member of the US Air Force Security Police, commented, “I am truly honored to be given this opportunity. I have had a passion for this sport since I was very young and have been involved with Little League® in a variety of capacities for many years. To be able to give back to the UK youth community and to Little League® in this manner is a humbling opportunity. There is no doubt we have a lot of work to do, but I have seen first-hand the passion and commitment of the local UK youth baseball and softball community and am ready to work with them to make a new future together.”

Mr. Peter Thompson, Trustee for LondonSports, commented about the first Little League® DA election held in the UK, “We appreciate the support provided by Little League® International and the Europe and Africa Regional Director in making sure an election took place and we look forward to working with them to create the best possible future for UK Little League®. It is a great result to have unanimously elected Darrin for this critical role and we know he will be solely dedicated and focused on youth baseball and softball in the UK. We appreciate the efforts of the support staff at BaseballSoftballUK (BSUK) who have administered Little League® over the years and look forward to continuing to partner with BSUK for youth investment and development.”

Despite declining Little League® participation rates, volunteers at local clubs have continued their efforts to recruit new players to the game while providing the best possible playing experience for existing players. The excitement and prospects generated by the MLB LondonSeries give UK Little League® the unique opportunity to energise the sport at the ground level through new youth initiatives and sustainable investments, including those made in partnership with Major League Baseball (MLB), Little League® International (including the $14,500 grant made to UK Little League under the ‘Grow the Game Grant Programme’), and Sport England® (via BSUK).

Matt Crawshaw, Youth President of the Leicester Blue Sox, added, “We are glad to have someone as respected and knowledgeable as Darrin volunteering to take over the critical role of District Administrator. Little League® in the UK has struggled to attract clubs to participate for a myriad of reasons. As a result, Leicester is one of the only Little League® chartered clubs outside of Southeast England and it is important for us to find ways to expand the chartering of local clubs from other parts of the country to grow the game we all love.”

Mr. Muller, who grew up in Southern California, moved to Windsor, UK more than 20 years ago. He started coaching with the Bracknell youth team in 1998 and was able to lead local youths to repeated success. He was selected the British Baseball Federation (BBF) Youth Coach of the Year in 2004 and 2006 and has also had the honour of representing Great Britain as a coach on many occasions.

Although he loved coaching and playing, Mr. Muller’s real passion developed into umpiring and, until his retirement in 2018, he spent nearly every weekend from April to October on a baseball field. He has umpired at all age groups and has umpired at six Europe and Africa Little League Regional tournaments and was also selected to umpire the Little League® Juniors World Series in Taylor, Michigan.

Ben Trinder, President of the London Youth Baseball League (LYBL), summed it up by saying, “It has been great to see the Little League® clubs across the UK come together throughout this process. While we often compete on the field, the small community of players and clubs working together to grow the youth game is the only way forward. We are at a critical juncture for UK Little League® and having a fresh start with broad stakeholder alignment and a DA election was an important first step. With all of us working together under Darrin’s leadership, we can envision a future where UK Little League® realises its full potential.”

Each Little League program is organised within a community. As part of a league’s annual charter it establishes its own boundaries to operate and support, providing children who reside or attend school within those boundaries the opportunity to participate within the league.

All league personnel, including the elected board members and officers, and each of the managers, coaches, umpires, auxiliary, field workers, etc., should be volunteers interested in providing the benefits of a Little League program to the youth of their community.

The operational structure of the program begins with the decision of a local community or neighborhood to charter a program at the local level. Several local leagues in a given area collectively form a district that is managed by a volunteer District Administrator.  The D.A. coordinates and collaborates with the regional center, staffed with professional employees, and overseen by a Regional Director and the staffs at Little League’s five Regional Centers in the United States and four internationally.

The Second Level: The District

For administrative and tournament purposes, roughly 10 to 20 leagues in a given area usually comprise a district. The District Administrator is an experienced volunteer elected by the constituent leagues to counsel, direct, and provide leadership in the policies and rules of the Little League program, and to serve as liaison between the leagues and the Regional Director. The District Administrator organizes the district tournament and attends the quadrennial International Congress where Little League rules and regulations are democratically reviewed and revised for the betterment of the program. There are more than 600 District Administrators worldwide, each with a staff of appointed and/or elected assistants to help more effectively serve his or her leagues. It is recommended, but not required, that the District become incorporated.

Little League operations are headquartered in South Williamsport, Pa. (USA). The full-time staff members of Little League Baseball and Softball work with District Administrators, their assistants, and local league officials in developing new leagues, coordinating tournaments, and assisting in the overall operation of a local league program. The District Administrators report to the Regional Director, of which there are five in the United States (Warner Robins, Georgia; San Bernardino, California; Whitestown, Indiana; Bristol, Connecticut; and Waco, Texas), as well as in Puerto Rico; Canada; Japan; and Poland. Worldwide, there are more than 110 full-time Little League employees.

A spokesperson, for the British Baseball Federation, said, " Since the start of UK Little League there has not been a vote for District Administrator. We are delighted there has finally been an election for the District Administrator (DA) for the UK after a strong lobby from our member youth clubs. The mentioned finally gives the UK Little League District Administrator role legitimacy and allows the clubs which are direct stakeholders in Youth Baseball and Little League baseball to put their confidence in a person who they believe in and support. Democratic Little League DA elections gives the mandate to the elected DA to ensure that Little League is run in the most efficient way which brings about prosperity, participation and removes conflicts of interest. Further, by now having an elected DA, it means we have terms limits on the position. Term limits provide a mechanism for holding DA leaders accountable, reduces the tendency that non-performance (participation, development and spiralling costs to enter teams in the tournament) has no consequences and underperformance remains at the status quo. Rather by ensuring there is a process (term limits) for DA turnover if Key Performance Indicators are not met during his or her DA tenure, it means the greater need by the DA to be innovative and accountable in the future for satisfactory performance or a DA change will be inevitable. We are supportive to work with Darrin Muller and now that he has the mandate from our clubs, we look forward to his leadership to rejuvenate Little League in the UK."