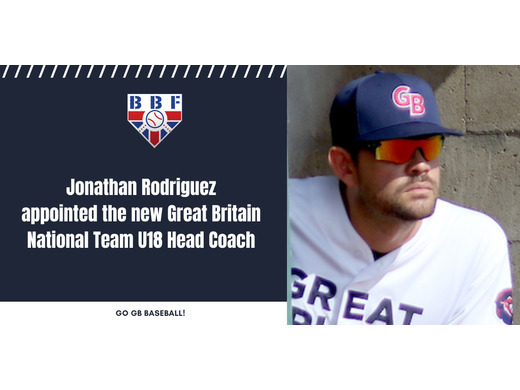 Appointed as head coach to the Great Britain National U18 Baseball Team.

The British Baseball Federation (BBF), announces the appointment of Jonathan Rodriguez, as the new U18 National Team head coach. Jonathan has served as president and head coach to the Long Beach Legends Baseball Club in the United States. The Legends is a baseball programme in southern California for college-aged players.

Coach Rodriguez moved to the UK in 2019 with his family and has been assisting our National Team programme since.

A spokesperson for the BBF said, "to have a young coach with international experience, proven track record, excellent coaching skills and good character, exemplifies the GB Baseball programme. Coach Rodriguez, open personality, lends a lot to engage and get buy-in from players and parents most affected by our transformational change. The same goes for all our other coaches, which we are equally proud of and grateful.

The spokesperson for the BBF went on to say, "The BBF and our Great Britain National Team Programme has been going through a strategic transformational change over the last four years. For example,

Our National Teams are expected to resume later this year when baseball operations are given the all-clear. To learn more about our National Team Programme, how to tryout you can e-mail Jason Pearce, at jason.pearce@britishbaseball.org