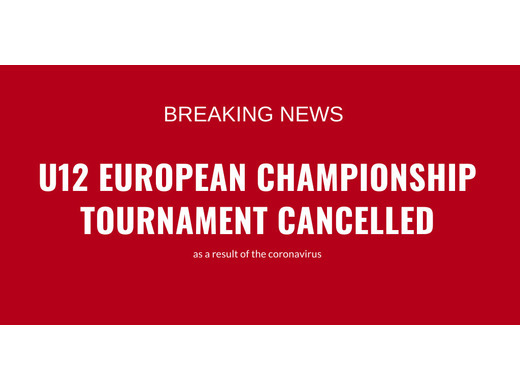 With the risk of the coronavirus (COVID-19), creating limitations to organise all of the logistics for the tournament with so many uncertainties, and government lockdowns still in place, CEB regrettably has decided to cancel the U12 European Baseball Championship with immediate effect.

As well, CEB has decided to cancel:

Further, the following CEB events are being postponed until further notice:

A spokesperson for the British Baseball Federation (BBF) said, "The decision to cancel the U12 European Baseball Championship comes under the coronavirus (COVID-19) threat. We support CEB's decision as they know more about the constraints and deadlines involved to run such international events. This is no time for second-guessing; instead, we support CEB."

In 2018, the British Baseball Federation (BBF) added the Great Britain National U12 Team to our National Teams (GB Baseball). In two short years, the U12 achieved the honour of competing against the top European teams and earning a place in the Championship Tournament.

The spokesperson for the BBF went on to say, "We feel for the disappointment of our U12 players and coaches having the European Baseball Championship tournament cancelled. However, we honour our GB Baseball U12 team as they are the youngest of the five GB Baseball Teams involved in the programme and the future success of British Baseball on the world stage. We cannot be prouder of our head coach Eric Anderson, for his stewardship in organising a great team of youths with great character, respect for the sport, programme and honour to wear the Great Britain Baseball National Team uniform which is the basis for all our teams. Also, we are grateful for his two assistant coaches Jamie Dix and Erik Gufstanson for all their support in developing the team.

We want to send out the names of our U12 team roster and give them a tremendous loud "shout out" for all of their achievements and making us so proud:

While some of our U12 players' graduate to play up in our U15 team after this year, we remain very optimistic of GB Baseball U12 Team future.  We want to extend our gratitude also, to the parents of the players, and the volunteers to the programme who exemplify the commitment to the programme. Lastly, we want to thank the De Giorgi family for their donation to the programme. Gifts like the mentioned and others go on to sub-finance and go along way to the programme's sustainability. That is, considering the BBF is a self-funded National Governing Body."

Head Coach Eric Anderson said, "This was a great group of kids to be able to coach last summer. They played hard and had no quit in them. Coach Gustafson, Coach Dix and I were happy with the result and are very proud to say we were able to be apart of this age group moving up to the Euro Championships this year. I feel terrible for the Arnav, Christian, Lorenzo, Wyatt, and Rupert who I know were going to lead this years team in Belgium. As we always talked about, we have to control what we can control and I hope this team is incorporating those thoughts every day in this very tough situation everyone is in. We are already looking forward to 2021!"

The BBF continues to monitor the decision from CEB regarding our U15 Team, which is scheduled to take part in July.

The BBF is expected to make its own decision about its own league operations opening in the coming days.

To advance and promote opportunities in baseball, so that participants in our sport can enjoy and expand their reach through our Federation.