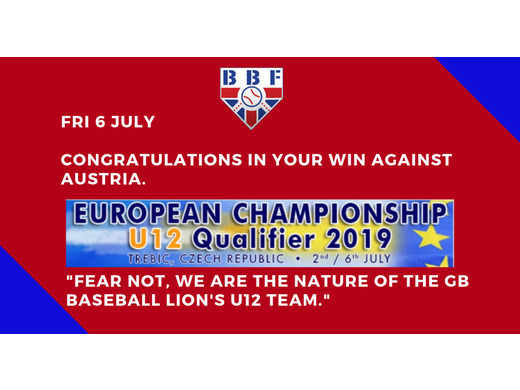 Today started differently than the other days in the European Qualifier U12 tournament as Austria came in with a dominating lineup and pitchers. Austria considered one out of the top six teams in the tournament GB Baseball had their work cut out for them.

GB Baseball Head Coach Eric Anderson said before the game "The GB boys have played great TEAM baseball so far.  Our quality at-bat approach at the plate has been phenomenal! Scott Bourgeois (pitch count coordinator) who is helping has had a great plan, and we are executing it on the field. We are looking forward to today's matchup with a tough Austrian team, and we will be ready to go at game time!"

Both Austria and GB Baseball did not score in the first inning.  Austria did get two hits, however, left one man on base.

GB Baseball in the bottom of the first, sent five players to the plate with no luck as they ended the inning with nil runs on one hit.

Austria makes a point they are coming in to play aggressively as their bats and baserunning light up GB Baseball for two runs. The mentioned after some critical hits off the GB Baseball starting pitcher (Lawler) and good base running. With the score at the half inning Austria two runs to GB Baseball nil.

In the bottom of the second inning, GB Baseball sends three batters to the plate with no runs or hits.

Austria manages to get two runs on two hits and an untimely error by GB Baseball.

In the bottom of the inning, GB Baseball sends four batters to the plate, however, end the inning with nil runs and one hit.

Austria sends four batters to the plate, but GB Baseball holds them to no runs.

GB Baseball begins their comeback in the bottom of the inning. Travis (The Natural) Hartfield gets a double to lead GB Baseball. He advances to third when the next hitter hits a fielder's choice. The next batter Erik Gustafson hits a ball to the right side which allows Hartfield to score the first run for GB Baseball. The following batter makes an out to end the inning.

Both teams are unable to score, and the fifth inning ends with Austria up four runs to GB Baseball one run.

Austria is unable to score and go down after four batters.

Austria in their last at-bat to try to tie the game send five batters to the plate and get one hit, and leave one on base. The game ends with GB Baseball earning their fourth consecutive win of the tournament.

That is, we should expect a lot more trivia and history to follow about those amazing young GB Baseball Lion's which are making history in Trebic, CZ at the European Qualifier U12's.

Again all the credit should go to all the fantastic U12 players, coaches - Head Coach Eric Anderson, Assistant coaches - Erik Gustafson and Jamie Dix. Let's not forget Jason Pearce our National Team Official for overseeing the programme. Plus all the support from the volunteers at and from afar who are doing their part to support the team" said a spokesperson for the British Baseball Federation.

Next and final game for GB Baseball is Saturday, 6th July when GB Baseball take on Slovakia, starting at 13:00. 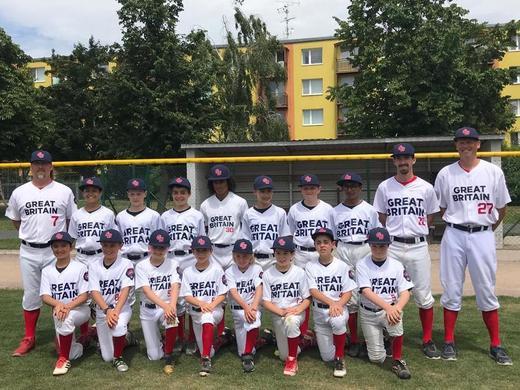