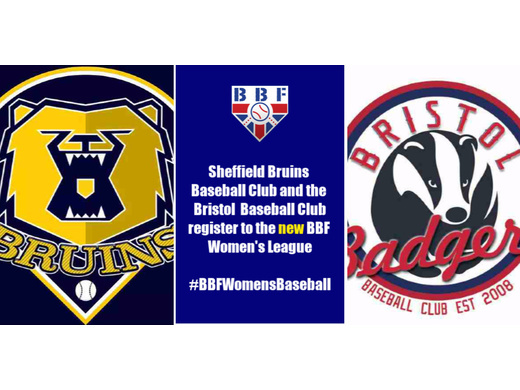 A spokesperson for the BBF said, "The newly formed BBF Women's Baseball League should be viewed as an integral part of the Federation to promote and play a role in the sustainability of our sport. Our Women's Baseball Roadmap goals will be realistic, clearly defined and serve the women's baseball community.

What to expect (but not exhaustive):

The spokesperson went on to say, "We are honoured too have both the Sheffield Bruins Baseball Club and Bristol Baseball Club join our new formed Women's League. To have the Sheffield Bruins Baseball Club women, under the direction of Ms Kelly Wright, join the BBF, offers us a member in the north. The Bruins, which were formed in 2018, have made great strides in a short timeframe. For example, in setting up seniors and now a women's team. Further, consider the Bruins mixed seniors team has seen a tremendous winning percentage in league play (79.2%). One of the most noted parts of the Bruins top seniors team has been the women who are part of the roster. The Bruin women have been a critical factor in the expansion of the club, from both from the administrative perspective, playing and recruitment element. Now to get the Bruin women to form a women's team and take part in our new BBF Women's League means we can expect a good baseline of good competitive women players in our league.

On a separate note, in addition to the Bruins, we now have the Bristol Baseball Club as part of our Women's League. Bristol is known as an innovative and successful programme in the Bristol community, which needs mention and great appreciation. Bristol has earned a good following of baseball players and the Bristol press as a result of Richard Evans. The Bristol Baseball Club development of women's baseball is relatively new, but already boasts recognition in setting up a women's team from the Bristol community. Molly Willcox, who is a club director and a member of the WB-UK organising group, said, "I am delighted to see us take this step. Bristol is one of the most progressive sports clubs in the country, and we all look forward to developing the best women's team in the country."

As a result of COVID-19 and delay at the start of the season, we can expect some delay in 2020, in getting our face-to-face activities started for our new Women's League. However, behind the scenes, BBF plans are well underway to plan, to implement and deliver a successful Women's League to the British Baseball community.

For more information to be a part of the BBF Women's League, please contact Mrs Amanda Hocking by e-mail amanda.hocking@britishbaseball.org.

"To empower and promote women so they can experience and enjoy equitable baseball opportunities to reach their potential both nationally and internationally."